Less than 60 days following the beta release of their new Ethereum-based NFT wallet, GameStop has gone live with their long-awaited NFT marketplace. The release tracks alongside anticipated deadlines, as the company forecasted earlier this year that the anticipated marketplace release date would be “by the end of the second quarter of the fiscal year 2022.”

As we enter the back half of the year, GameStop is delivering at the least it’s initial marketplace product – so let’s take a look at what has gone live, how we got here, and what we can expect moving forward.

GameStop: How We Got Here

Speculation began late last year that GameStop, once a go-to for video games and consoles, then a meme investment, had turned into it’s third form – an NFT marketplace. A true trifecta. Speculation turned to confirmation by late in 2021, and as the new year turned, the company began it’s staffing shift – hiring on new team members that carried a focus in “blockchain gaming, ecommerce and technology, product refurbishment and operations.”

Following the announce of the new NFT marketplace, details and partnerships continued to emerge onto the scene – including a deal with Immutable X that will see Immutable X Layer-2 NFT integration later this year (the platform currently supports Loopring L2). Despite reports of employee backlash in early stages, GameStop seems to have persevered past the early stages (in a bear market at that) and has officially hit launch day. 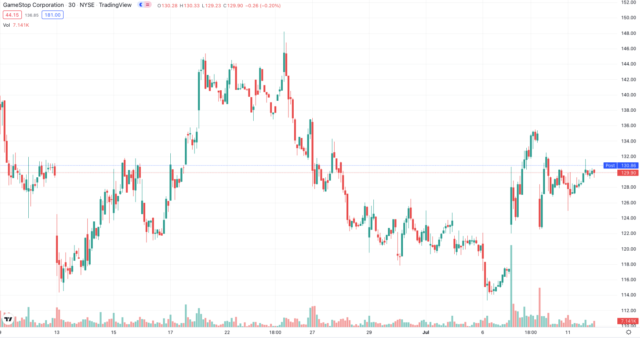 Related Reading | Ethereum 2.0 Weekly Deposits Have Slumped Down To Lowest Ever

Can A Warm Market Reheat?

What can we expect moving ahead? GameStop seems to have some semblance of a realistic perspective that it will take a lot of time and work to get a hardcore audience like gamers to come around to something as rigid as NFTs have proven to be. Additionally, this year’s growth rate for NFTs looks undoubtedly strong, but not nearly as vertical as last years, and the broader crypto market has stalled in 2022 despite sky-high expectations from outstanding previous performance over recent years.

In all, there’s little to learn thus far from how GameStop will differentiate their approach to NFTs relative to other marketplaces, but here’s what we’re seeing from the platform upon the initial release:

Related Reading | Ever Wonder How Dogecoin Investors Are Faring In The Bear Market?