Bitcoin (BTC) mining difficulty is expected to adjust downwards by about 4.5% during the next adjustment window, on July 21 at around 7 p.m. BST, according to an analysis conducted by CryptoSlate using Glassnode data.

This event will mark the most significant decrease in mining difficulty since China’s crackdown on Proof-of-Work (PoW) mining in May 2021. Pre-ban, research suggested that 75% of the network’s hash rate originated from China.

The chart below shows four past instances of a significant downward adjustment. These occurred in March 2020, May 2020, October 2020, and July 2021, with the adjustment in July being the most significant drop. 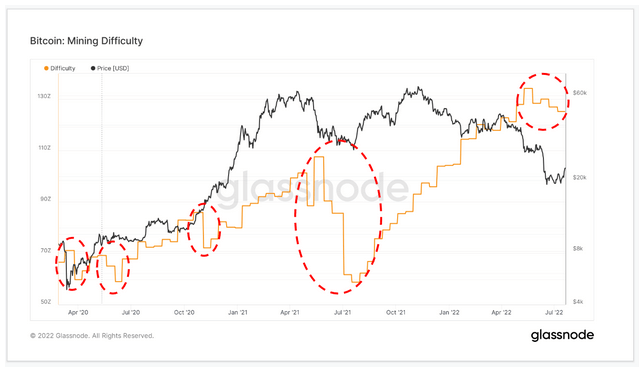 The Hash Ribbon indicator identifies Bitcoin miners’ distress, which refers to the cost of mining BTC being too expensive relative to its price. High distress points to miner capitulation, which in some instances can indicate a market bottom.

The chart below shows the 60-day and 30-day hash rate moving average (MA) in conjunction with the BTC price. When the 30-day MA crosses above the 60-day MA, the ribbon changes to a dark red color, suggesting capitulation (miners giving up) and a possible bottom, indicating a bullish scenario. 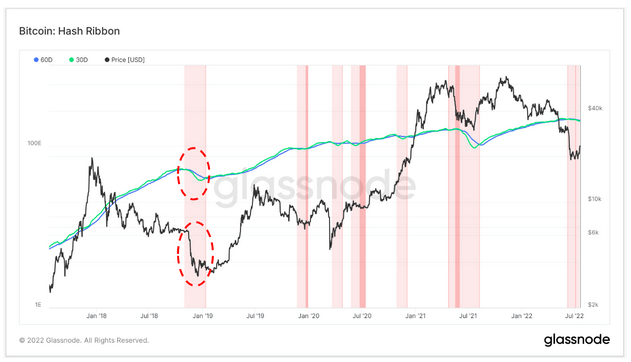 Similarly, when the 60-day MA crosses above the 30-day MA, the ribbon changes to light red, giving rise to a bearish scenario.

The current miners’ capitulation phase has been ongoing for the last 42 days. During the 2018 bear cycle, capitulation lasted for 72 days, with BTC posting 300% gains to top out at $12,000 after the capitulation ended.

Since July 2021, following the China ban, the hash rate has been forming a rounding top pattern. This suggests weak miners are still capitulating, leaving stronger miners to mine in a less competitive environment.

Mean hash rate refers to the average estimated number of hashes per second resulting from miners’ efforts. It is often taken as a measure of security and an approximate gauge of the number of miners upholding the network.

Bitcoin’s hash rate peaked in May, leading to a definitive downtrend. Taken in conjunction with Hash Ribbon data, this supports the thesis that weak miners are exiting, leaving the most efficient miners supporting the network. 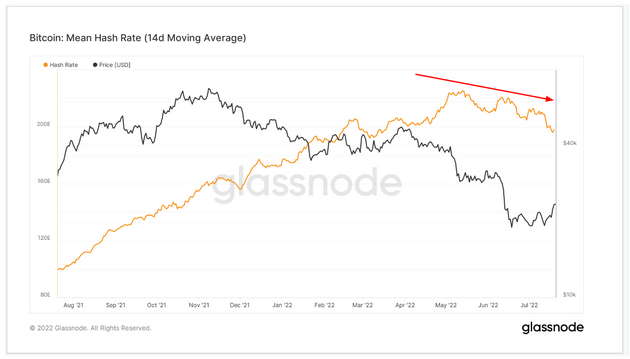 The net position change of Bitcoin miners refers to the rate of change in unspent supply. Positive flows indicate miners are holding onto more tokens than they are selling – accumulation.

Currently, miners are in a modest distribution phase, suggesting miners are selling their holdings, mostly to due a multitude of factors ranging from market conditions, operational pressures, energy costs, and older mining equipment becoming unprofitable. However, the magnitude of the current net negative position change is small compared to historical instances of this happening. 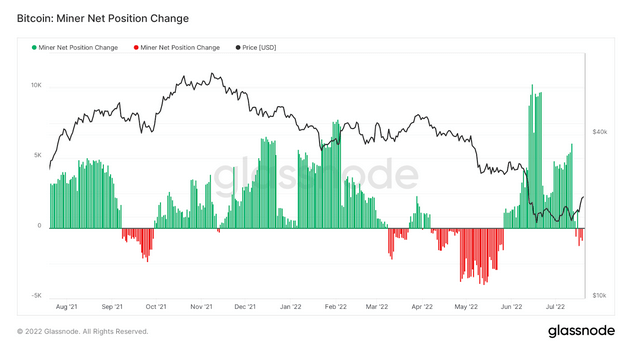 In a recent tweet, Jason Williams, the author of Bitcoin: Hard Money You Can’t F*ck With, posted about the nine stages of mining, which ended with the price of BTC increasing.

Bitcoin programmatic monetary policy is such a cool feature. Watch it work over the next 4 weeks.
1.Bitcoin price drops
2.Miners switch off ASICS due to inefficiencies.
3.Hash rate drops
4.Difficulty drops

On-chain metrics show the market is currently at stage 4 – mining difficulty dropping. In the coming weeks, on-chain data could show an increase in hash rate and difficulty reverting upwards.

Although miner capitulation is still in progress, the transfer volume of BTC from miners to exchanges suggests miners’ distress is cooling. 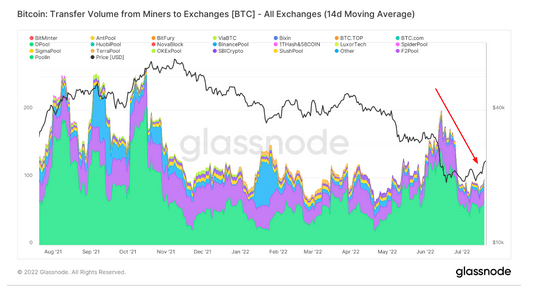 Although the key factor to consider is the end of the capitulation phase, macroeconomic factors, including the outcome of the FOMC meeting on July 27, are in play.